Our African people painting collection celebrates the wealth of cultural diversity of the continent's peoples...

From the rulers to the ruled, the traditional to the modern, warriors to the peacekeepers.

Obviously, these are not discrete categories and the monarchs and warriors may also show up as tribal peoples.

Below are the categories you can expect to find in our collection. 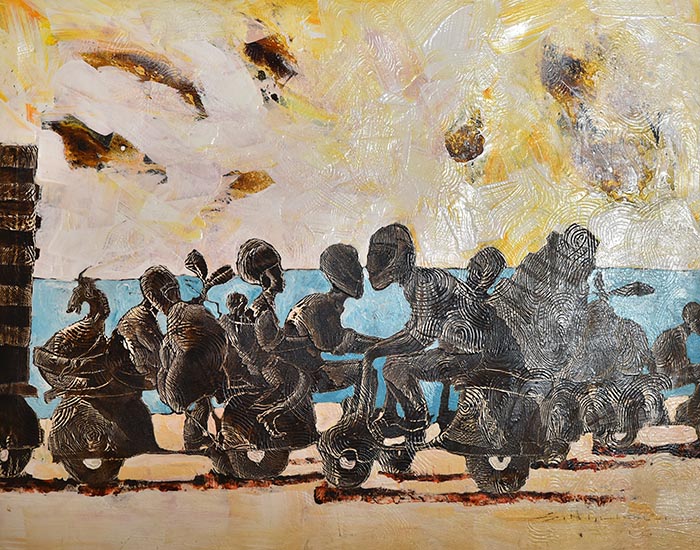 Rush Hour by Samuel Njuguna. In Africa, it is as if the clock moves at different paces in the city and the villages. This oil on canvas painting is very early Samuel Njuguna and his style has evolved considerably. I am especially intrigued by how he accomplishes the thumbprint-like scratches in the black paint seems to be a closely guarded trade secret.

Africa has two sets of monarchies: sovereign, and sub-national monarchies.

The sovereign monarchies are Lesotho, Morocco, and Eswatini (formerly called Swaziland) which is the world's only absolute monarchy. In simple terms, this means there are few constitutional restraints to the Eswatini king's powers.

And the current absolute monarch who lays claim to the fame? King Mswati III.

In our royal collection, we turn the prevailing paradigm on its head for just a moment. So kings, queens, princes and princesses of Africa's monarchical societies are subjects, for a change 😀 (clearly, am an incorrigible commoner).

But the captured royal subjects still regal and exude power and authority. All of them.

Several African warriors are portrayed in folklore for putting up a spirited fight against colonialists, and for resisting slave trade.

The warriors who are steeped in history include Shaka the King of the Zulu, Samori Toure, Sonni Ali and, Kinjikitile Ngwale who was the leader of the Maji Maji rebellion.

While you may chance upon the artists' impressions of these warriors of yesteryear, they are unlikely to be originals...

So it's obviously a lot easier to acquire paintings of present-day male warriors and female warriors.

These are invariably resplendent in their battle regalia and the paper or canvas paintings make for beautiful wall art or unique gifts for lovers of African art.

And for maximum visual effect and double the delight, consider pairing up a male and female warrior set in your African people painting collection.

Looking for a wider selection? Check out our African warrior collection.

Closeups of mother with baby tell the story of the disproportionate gender-based division of labor that pertains in Africa. 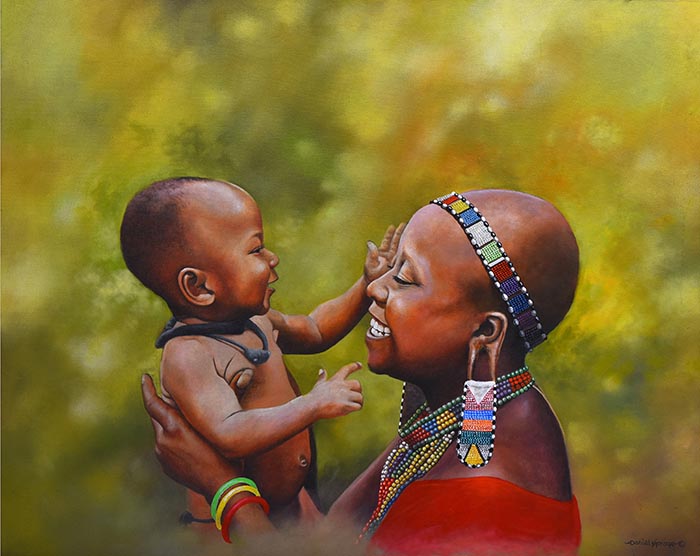 Happy Mother by Daniel Njoroge is an acrylics on canvas painting of a Maasai mother and her baby. A mother bejewelled and bedecked in a red shuka (sheet) plays with her baby.

Whether the baby is strapped to the mother's back, is on her laps or is playfully held up, it reinforces the reality of stratification of housework along gender lines.

Besides babysitting, African women have to collect water and firewood, tend the family gardens, forage, prepare, and and cook food, do the laundry, housekeeping and keep the general homestead tidy.

So African women have generally honed their multitasking skills. Because they are so central to life in Africa, it's fair to say that no African people painting collection is complete without them.

African women are very close to their children especially when these are still in their infancy and need round the clock care. 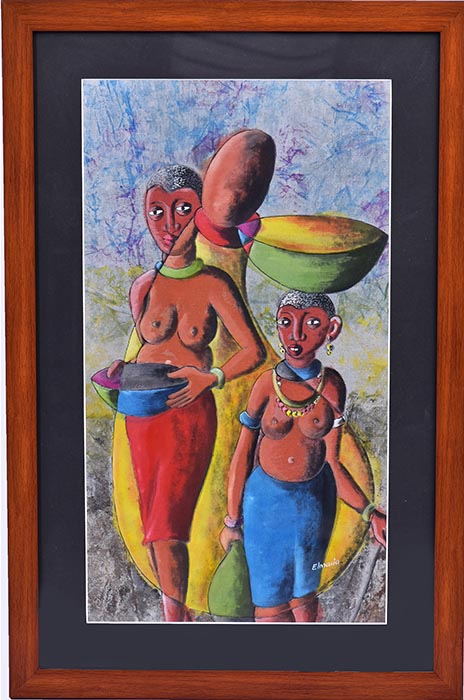 Impressionist painting of two traditional African women by Elmada. In addition, the artwork also features baskets and a giant gourd, both of which are commonly used utensils in rural Africa.

So artists are captivated by this relationship and frequently depict it in their African people painting series.

But African women have an identity of their own.

Granted, many of these revolve around their household chores as borne out by the painting to the right by Elmada.

To this day, women carrying food-laden baskets on their heads or in their hands are a common sight in the continent's rural areas.

A nagging question is why Elmada almost fully encapsulates these women in the yellow gourd...

Dried gourds are used as utensils for making ghee (clarified butter) and for churning sour milk, which is a staple that also doubles as a probiotic.

And, traditionally, bare-chested African women were not frowned upon so this painting is not intended to evoke sensual emotions, certainly not when the women are grey-haired.

The culture of Africa's tribal peoples—like their counterparts around the world—is fast disappearing with the relentless onslaught of globalization.

Our tribal art consisting of couples, men, women, girls and boys, with many of the single-subject pieces each focusing on the face and the rest of the upper body (portraits).

This then zooms in on the headdress, earpieces, facial tribal markings and ornaments which serve the dual role of clan identification and beautification, and the very ornate neck beadwork.

Given the rapid erosion of this tribal culture, it's definitely a good idea to get your tribal people art while you still can.

Besides the royalty, warriors and other tribal peoples, paintings of ordinary folks like me captured (actually liberated)...

Dancing, carrying out a raft of cultural activities, or in a mundane market scene also continue to pique the interest of art collectors. 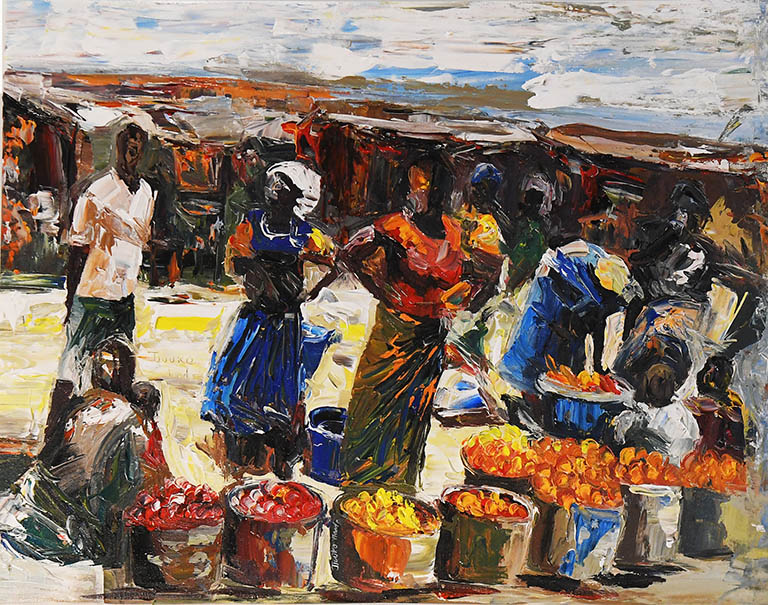 Impressionist painting of women vendors at a roadside market by Hoods Jjuuko. Wrapped khanga sheets act as aprons, keeping their dresses from getting dirty as they ply their perishable wares.

Which is Your Favorite African People Painting?

Over to you, which of the above is your favorite painting and why? Please let me know in the comments below.

Over to you! Share your thoughts about what you just read in the comments section down below.